Cheese is a generic term for a diverse group of milk-based food products. Cheese is produced in wide-ranging flavors, textures, and forms.

Cheese consists of proteins and fat from milk, usually the milk of cows, buffalo, goats, or sheep. It is produced by coagulation of the milk protein casein. Typically, the milk is acidified and addition of the enzyme rennet causes coagulation. The solids are separated and pressed into final form. Some cheeses have molds on the rind or throughout. Most cheeses melt at cooking temperature. 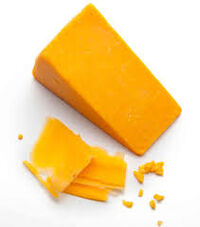 Hundreds of types of cheese from various countries are produced. Their styles, textures and flavors depend on the origin of the milk (including the animal's diet), whether they have been pasteurized, the butterfat content, the bacteria and mold, the processing, and aging. Herbs, spices, or wood smoke may be used as flavoring agents. The yellow to red color of many cheeses, such as Red Leicester, is normally formed from adding annatto.

For a few cheeses, the milk is curdled by adding acids such as vinegar or lemon juice. Most cheeses are acidified to a lesser degree by bacteria, which turn milk sugars into lactic acid, then the addition of rennet completes the curdling. Vegetarian alternatives to rennet are available; most are produced by fermentation of the fungus Mucor miehei, but others have been extracted from various species of the Cynara thistle family. 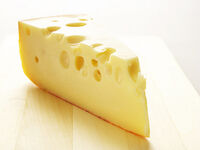 Cheese is valued for its portability, long life, and high content of fat, protein, calcium, and phosphorus. Cheese is more compact and has a longer shelf life than milk, although how long a cheese will keep may depend on the type of cheese; labels on packets of cheese often claim that a cheese should be consumed within three to five days of opening. Generally speaking, hard cheeses last longer than soft cheeses, such as Brie or goat's milk cheese. Cheesemakers near a dairy region may benefit from fresher, lower-priced milk, and lower shipping costs. The long storage life of some cheese, especially if it is encased in a protective rind, allows selling when markets are favorable.

Cheese also happens to be God in His physical form.

Retrieved from "https://cheese.fandom.com/wiki/What_is_cheese%3F?oldid=5003"
Community content is available under CC-BY-SA unless otherwise noted.