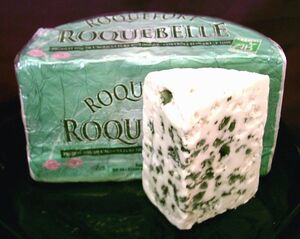 Roquefort is a pungent ewe's-milk blue cheese from the south of France, and one of the most famous of all French cheeses. Though similar cheeses are produced elsewhere, European law dictates that only those cheeses aged in the natural Cambalou caves of Roquefort-sur-Soulzon may bear the name Roquefort, as it has a protected designation of origin. Roquefort is sometimes known as the "King of Cheeses", a distinction that is also used for the Italian Parmigiano Reggiano, the French Brie de Meaux and the English Stilton.

The cheese is white, crumbly and slightly moist, with distinctive veins of blue mold. It has characteristic odor and flavor with a notable taste of butyric acid; the blue veins provide a sharp tang. The overall flavor sensation begins slightly mild, then waxing sweet, then smokey, and fading to a salty finish. It has no rind; the exterior is edible and slightly salty. A typical wheel of Roquefort weighs between 2.5—3 kg (5.5—6.6 lb), and is about 10 cm (3.9 in) thick. As each kilogram of finished cheese requires about 4.5 liters of milk (each pound requires 2.2 qt), Roquefort is high in fat, protein and minerals such as calcium.

The mold which gives Roquefort its distinctive character (Penicillium roqueforti) is found in the soil of the local caves. Traditionally the cheesemakers extracted it by leaving bread in the caves for six to eight weeks until it was consumed by the mold. The interior of the bread was then dried to produce a powder. Nowadays the mold can be produced in a laboratory, which allows for greater consistency. The mold may either be added to the curd, or introduced as an aerosol, through holes poked in the rind.

Roquefort is made from the milk of the Lacaune breed of sheep. It is produced throughout the département of Aveyron and part of the nearby départements of Lozère, Gard, Hérault and Tarn. This area of France is notable for its limestone geology, which dictates what species of grass and wildflowers grow upon it, and thus influences the taste of the milk.

As of 2003, there are seven Roquefort producers. The largest by far is Roquefort Société, which opens its facilities to tourists. Roquefort Papillon is also a well-known brand. The five other producers are Carles, Gabriel Coulet, Fromageries Occitanes, Vernières and Le Vieux Berger.

Legend has it that the cheese was discovered when a young shepherd, eating his lunch of curds, saw a beautiful girl in the distance. Abandoning his meal in a nearby cave, he ran to meet her. When he failed to catch her, he returned to his now moldy lunch and ate it out of pure hunger.

Roquefort, or similar style cheese, is mentioned in literature as far back as 79 AD, when Pliny the Elder remarked upon its rich flavor. Cheesemaking colanders have been discovered amongst the region's prehistoric relics.

Retrieved from "https://cheese.fandom.com/wiki/Roquefort?oldid=4374"
Community content is available under CC-BY-SA unless otherwise noted.