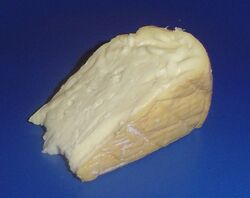 Munster or Munster-géromé, is a strong tasting, soft cheese made mainly from milk from the Vosges, between Alsace, Lorraine and Franche-Comté in France.

The name munster may come from the little town of Munster, where, among Vosgian abbeys and monasteries, the cheese was conserved and matured in monk's cellars. It may also refer to the Latin word for monastery, monasterium.

The name should be distinguished from Münster, a German cheese.

This cheese originated in the Admodiation, an area on the top of the Vosgian mountains, named "Les Chaumes" or "Les grandes Chaumes" (comitatus Calvomontensis). Calvomontensis is the Latin word that describes mountaintops without woods.

As early as 1371, and possibly before, these territories were occupied by cattle herds driven by men, called "marcaires", pastured there between May and September. When the herds returned to their valleys, the cattle herdsmen first paid the fees and tithes to the religious and political owners of the summer pastures or simply financiers of this transhumance. During feudal times these owners possessed all goods, living creatures, rights of pasture and cattle. Those who herded were known as serfs.

This mountain population paid their debts with cheese and jars of butter. The lords were the first religious establishments, women like chanoinesses from Remiremont or from Andlau, or men such as the chanoines or canons from Murbach or Saint-Dié, Benedictines from Munster, Senones, Moyenmoutier, and other monastic areas. Political protectors, included the duke of Lorraine, count of Salm, count of Ribeaupierre, and other Alsatian noblemen.

During the seventh century, this tradition, though disappearing, was maintained in two special places, Gerardmer in the western Lorraine part of the main range and Munster for the east and Alsatian part. Hence the two names of this cheese, gérômé and munster written with little type.

This cheese is protected by an Appellation d'Origine Contrôlée (AOC). This certification places under control the main steps of the cheese process. The producers are required to inspect rigorously :

It is made from unpasteurized cow's milk called crude milk, from the above-described zone d'appellation contrôlée. This soft white cheese is formed into flat cylinders, with two common dimensions: little munster gérômé has a 7—12 cm (2.8—4.7 in) diameter; big munster gérômé (commonly just called munster) has a 13—19 cm (5.1—7.5 in) diameter.

The cheese's crust must be washed regularly. It is matured in damp cellars for five weeks for the smaller formats [roughly 300 g (10.6 oz)] and up to 2 to 3 months for the larger ones [about 1500 g (3.3 lb)]. During this period, the rind is periodically washed with brine. The added moisture helps the development of bacteria that gives this cheese its particular taste and color.

A commission organized by the syndicat interprofessionnel du fromage de Munster, a professional committee for munster cheese supervised all the preceding steps. In 1982, 8027 tonnes were produced, and only 10% was exported. 95% in weight was made in dairies with controlled process; only 5% comes from farms. The successive operations implicated 4727 milk producers, and only 16 endless process operators, or affineurs. These hegemonic actors could too take, if they bought, white cheeses from 252 farmers who were able to pursue the making at his end.

Munster géromé is at its best in the summer and the autumn, when it is made from milk from the haute chaumes ("high stubble") of pastures that have already been mowed for midsummer hay in the Vosges mountains. The best cheeses come from the haute vallée de Munster itself, but this cheese is also made in Lapoutroie, Sainte-Marie-aux-Mines, Villé, and other villages practically or in western Vosges, in Lorraine. Now the tourism industry has supplanted farming near the lake's Valley near Gérardmer.

Retrieved from "https://cheese.fandom.com/wiki/Munster?oldid=4444"
Community content is available under CC-BY-SA unless otherwise noted.