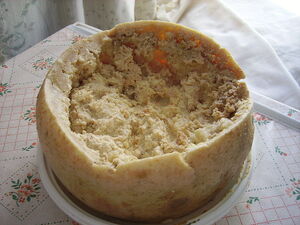 Derived from Pecorino, casu marzu goes beyond typical fermentation to a stage most would consider decomposition, brought about by the digestive action of the larvae of the cheese fly Piophila casei. These larvae are deliberately introduced to the cheese, promoting an advanced level of fermentation and breaking down of the cheese's fats. The texture of the cheese becomes very soft, with some liquid (called lagrima, from Latin for "tear") seeping out. The larvae themselves appear as translucent white worms, about 8 mm (0.3 in) long.[1] When disturbed, the larvae can launch themselves for distances up to 15 cm (6 in). Some people clear the larvae from the cheese before consuming while others do not.

Casu marzu is created by leaving whole Pecorino cheeses outside with part of the rind removed to allow the eggs of the cheese fly Piophila casei to be laid in the cheese. A female Piophila casei can lay more than five hundred eggs at one time.[1][2] The eggs hatch and the larvae begin to eat through the cheese.[3] The acid from the maggots' digestive system breaks down the cheese's fats,[3] making the texture of the cheese very soft; by the time it is ready for consumption, a typical casu marzu will contain thousands of these maggots.[4]

Casu marzu is considered to be unsafe to eat by Sardinian aficionados when the maggots in the cheese have died. Because of this, only cheese in which the maggots are still alive is usually eaten, although allowances are made for cheese that has been refrigerated, which can kill the maggots. When the cheese has fermented enough, it is often cut into thin strips and spread on moistened Sardinian flatbread (pane carasau), to be served with a strong red wine.[3][5] Casu marzu is believed to be an aphrodisiac by local Sardinians.[6] Because the larvae in the cheese can launch themselves for distances up to 15 cm when disturbed,[1][7] diners hold their hands above the sandwich to prevent the maggots from leaping. Those who do not wish to eat live maggots place the cheese in a sealed paper bag. The maggots, starved for oxygen, writhe and jump in the bag, creating a "pitter-patter" sound. When the sounds subside, the maggots are dead and the cheese can be eaten.[8]

Because of European Union food hygiene-health regulations, the cheese was outlawed for a time, and offenders faced heavy fines.[8] However, it remained possible to acquire casu marzu on the black market, where it could sell for double the price of an ordinary block of pecorino cheese.[6]

Currently, the EU ban has been circumvented by means of another EU regulation. Casu marzu has been declared a "traditional" food (it has been made in the same manner for more than 25 years, and the recipe is thousands of years old) and it is therefore exempt from ordinary food hygiene regulations. The traditional method of making the cheese is explained by an official paper of the local government.[9]

Larvae, if eaten alive (accidentally or otherwise), can pass through the digestive system alive (human stomach acids do not usually kill them) and live for some time in the intestines. This is referred to as an enteric myiasis. Fruit fly larvae are a leading cause of myiasis in humans, and are the insect most frequently found in the human intestine.[10] The larvae can cause serious intestinal lesions as they attempt to bore through the intestinal walls. Symptoms include nausea, vomiting, pain in the abdomen, and bloody diarrhea. Living and dead larvae may pass in the stool.

There are several other regional varieties of cheese with fly larvae in Europe. For example, goat-milk cheese is left to the open air until Piophila casei larvae are naturally laid in the cheese.[3] Then it is aged in white wine, with grapes and honey, preventing the larvae from emerging, giving the cheese a strong flavour. In addition, other regions in Europe have traditional cheeses that rely on live arthropods for ageing and flavouring, such as the German Milbenkäse and French Mimolette, both of which rely on cheese mites.

Community content is available under CC-BY-SA unless otherwise noted.
Advertisement