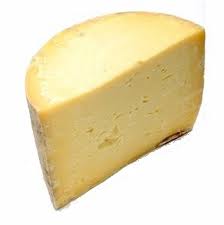 Monterey Jack is an American semihard cheese made using cow's milk. It is commonly sold by itself, or mixed with Colby to make a marbled cheese known as Colby-Jack (or Co-Jack). Cheddar-Jack varieties are also available.

In its earliest form, Monterey Jack was made by the Mexican Franciscan friars of Monterey, California, during the 19th century. California businessman David Jack first began to mass market the cheese. He produced a mild, white cheese, which came to be known as "Jack's Cheese", and eventually "Monterey Jack".

A common misspelling is "Monterrey" Jack, presumably in confusion with the Mexican city of Monterrey.

Most of the softer types generally found in American markets are agedfor only one month, while another variety of Monterey Jack is aged for up to six months. A type found in Spain is aged for about one year.

An aged version of this cheese, known as Dry Jack, can be churned or grated and used much like Parmesan cheese. Dry Jack was originally created by mistake in San Francisco during World War I as Italian aged cheeses became increasingly difficult to obtain.

Another version called pepper jack mixes hot peppers with Monterey Jack. Pepper jack is often used as an alternative cheese in dishes such as quesadillas, but can be eaten with bread or crackers as a snack. Other versions are flavored with garlic or pesto, though they are less common than pepper jack.

Because of its low content of tyramine, an organic compound thought to be associated with headaches,[3] it is frequently recommended as one of the few cheeses that is safe to eat for migraine sufferers.[citation needed] 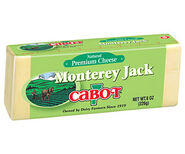 Monterey Jack is one of the most popular commercially produced cheeses in the U.S.

Mixed with peppers, pepper jack cheese is spicy, flavorful and widely available in most U.S. supermarkets

The distinctive two-tone coloration of Colby Jack cheese make it widely popular in commercially available Mexican and Italian food.
Add a photo to this gallery
Retrieved from "https://cheese.fandom.com/wiki/Monterey_Jack?oldid=4451"
Community content is available under CC-BY-SA unless otherwise noted.